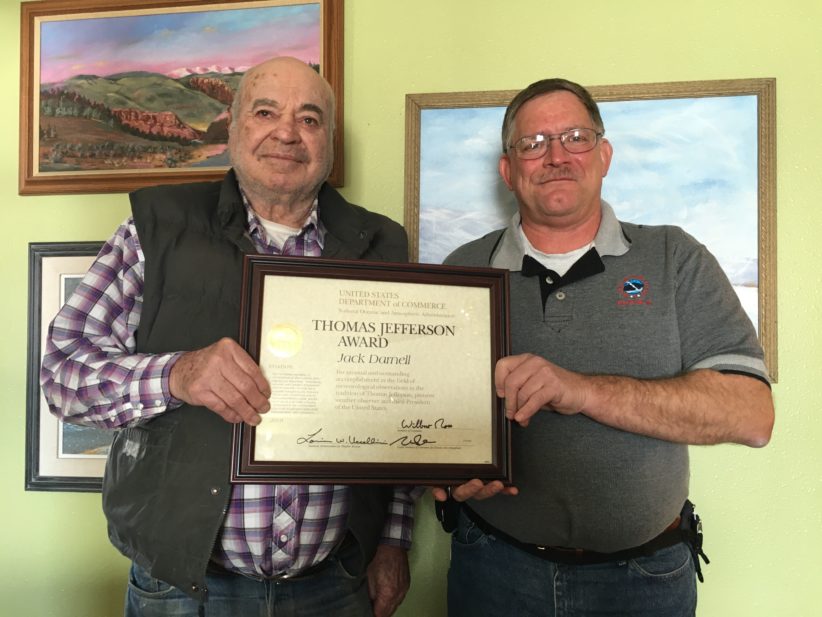 JackDarnall, left, received the National Weather Service's Jefferson Award from Ralph Estell. The award is presented annually to only five individuals across the country. NWS photo

Recognizing more than 31 years of excellent service to the nation’s climate observing network, the National Weather Service in Riverton has awarded Jeffrey City resident, Jack Darnell as a 2019 recipient of the agency’s Thomas Jefferson award. The Jefferson award is the National Weather Service’s most prestigious cooperative observer award and is presented annually for distinguished service in the Cooperative Weather (COOP) program. Of the more than 11,000 COOP observers nationally, only five recipients are selected each year across the U.S. to receive the Jefferson award.

Ralph Estell, Data Acquisition Program Manager (pictured with Mr. Darnell, above), and Chris Jones, Meteorologist In Charge of the Riverton, National Weather Service Office, presented Mr. Darnell with the award in late December 2019.  “There are very few observers that have been as deserving of this honor as Mr. Darnell. The daily reports from Jeffrey City ensure that climate records continue in this remote stretch of Wyoming and his dedication is remarkable,” said Estell.  Jones added “ Mr. Darnell has a spirit of service that lives in his soul.  We are grateful for his lifelong service to our nation, not just as a COOP observer.”

Mr. Darnell is a World War II Marine Corps combat veteran who was injured during the famous battle for Iwo Jima and was awarded the Purple Heart Medal. He began providing daily weather observations at Jeffrey City in 1988 as a COOP observer. The previous observer had been Western Uranium Corporation, which was ending their operations in the area.  Mr. Darnell and his family eagerly accepted the challenge of operating a COOP observing site at Jeffrey City. Over 30 years later, he continues this legacy with excellence, dedication and attention to detail.  Mr. Darnell is a life-long community volunteer and can still be seen helping with ranch roundups.

The National Weather Service Cooperative Weather Observer program has given scientists and researchers continuous observational data since the program’s inception more than a century ago. Today, more than 11,000 volunteer observers participate in the nationwide program to provide daily reports on temperature, precipitation, and other weather factors such as snow depth, river levels, and temperature.

$17K rang up fraudulently on credit card; Pursuit called off on Reservation